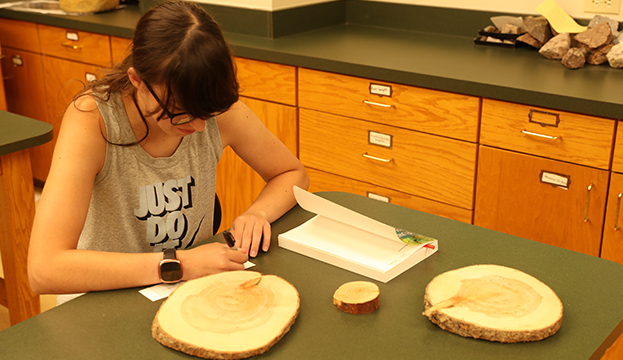 That big tree in your back yard—the one that purifies the air, provides a respite from the sun, and is home to a family of robins—has also been providing a detailed climate record for decades.

If you’ve ever seen a tree stump, you’ve noticed that the core has a series of concentric rings. These rings indicate how old the tree is and what the weather was like during each year of the tree’s life. Such insights provide scientists like Dr. Christopher Dolanc, associate professor of biology at Mercyhurst University, a means to accurately date erosion and other climate conditions along the Lake Erie shoreline.

Dolanc and Geology Professor Dr. Nicholas Lang, who co-direct the university’s Environmental Science program, are working to develop a bluff erosion model this summer. Their research is supported by a $54,500 grant from the National Oceanic and Atmospheric Administration (NOAA) conveyed through the Pennsylvania Department of Environmental Protection (DEP). The funds are being used, in part, to pay five student researchers, including 2022 graduates Nicole Schwab, Albert Jackson, and Isabelle Brewer, and rising seniors Kennedy Beasley-Watson and Katie Goodenow.

The team is centering its research on Shades Beach in Harborcreek Township and Erie Bluffs State Park in Girard/Springfield townships.

For their part, Dolanc and his students are focused on dendrochronology, or the scientific method of dating tree rings.

“Students are collecting tree cores at the two sites from trees that grow on the bluffs at different positions,” Dolanc explained. “They bring the cores back to the lab at Mercyhurst and process them by sanding the wood, counting the rings, and comparing cores from different trees to look for common patterns. For example, if all trees share a common set of narrow rings from 1982-1984, it could mean they all were impacted by the same erosion event that occurred in 1982 that damaged their root systems.”

Meanwhile, Lang and his group are taking a more high-tech approach. They are gathering data, like topography and vegetation cover, and importing that into a GIS program called ArcMAP to calculate bluff loss over time and generate erosion prediction maps.

“We are taking shoreline images and tracking how much erosion has occurred at the bluff edge over the past 15 years,” Lang said. “Students have images collected by airplanes from 2007 and 2018 that clearly show the bluff edge and they are comparing that to GPS data they have collected in the field this summer from along the current bluff edge. Overlaying the data in ArcMAP allows them to see how much of the top of the bluff has retreated over that time frame.”

While initial findings are consistent with field surveys done by the Pennsylvania Department of Conservation and Natural Resources, Lang said the team’s research shows there are multiple ways of measuring erosion rates.

“With Chris’ work, we are finding that most erosion is happening on the bluff face and not so much at the top of the bluff edge,” Lang said. “We’re also starting to get dates of when some of the bigger erosion events occurred.”

Dolanc added, “We figured out the top of the bluffs are more stable because the trees that live there are consistently older than the trees living closer to the bottom of the bluff.”

At the conclusion of their work, Dolanc and Lang will deliver a final report to DEP, including GIS maps, that provides a qualitative model of erosion styles and frequencies of large mass wasting events.

Dolanc said the research not only informs the disciplines of ecology and geology but provides useful data for the human population, such as in the case of potential land development. And, for the students, it presents the opportunity to do the meaningful research and present their findings at a geology conference in Denver later this year.

Schwab, who graduated in May with a degree in Environmental Science, said the experience has been both enlightening and enjoyable. “I took dendrochronology my junior year and really liked it,” she said. “When Dr. Dolanc was looking for students who were efficient in dendrochronology for this project, I was fortunate to be still be here, and so I took it,” she said.