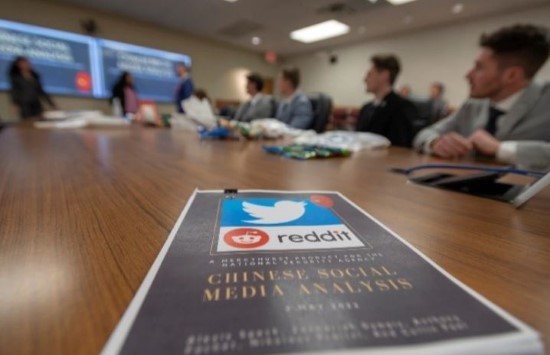 (EDITOR’S NOTE: This story and accompanying image were published by the National Security Agency/Central Security Service, a U.S. Department of Defense combat support agency and member of the U.S. Intelligence Community.)

FORT MEADE, Md. — Partnerships are vital to the National Security Agency (NSA), and an academic relationship forged with Mercyhurst University last year is already paying dividends for both parties.

NSA established an Educational Partnership Agreement (EPA) with Mercyhurst University in August of 2021, just one of a multitude of partnership efforts between the agency and academia. The EPA between NSA and universities/non-profit organizations sets the foundation to support education efforts for students in science, technology, engineering, and mathematics (STEM), as well as in language and other skills.

“I was honored to mentor and work with the students and am impressed by the research they achieved in three months,” said Joe Reinhard, the first IAFAL for Mercyhurst University.

Following the students’ capstone presentation, Angie Painter, NSA’s higher education advocate in Academic Engagement, partnered with representatives from NSA’s Cybersecurity Collaboration Center (CCC) and National Cryptologic Museum to facilitate a tour where the students learned about NSA’s mission, the history of signals intelligence in the 20th century, and unclassified cyber work being done by the CCC. While touring the CCC, the students learned how NSA partners with various cybersecurity entities and how they work together to detect cyber threats in software and hardware.

“The IAFAL program within the Academic Engagement partnership with Mercyhurst University represents the future of NSA’s hiring initiative for the next generation of intelligence analysts,” said Pamela Jock, then-chief of Academic Engagement.

“NSA’s ability to engage with academic partners is vital to its success, and the intelligence analysts produced by Mercyhurst University are critical to the next generation of NSA experts,” she added.

“This is another example of the great opportunities students of the Ridge College are afforded in gaining real-world, applied experience,” Fuller said. “The students’ level of professionalism in both the product developed and the briefing provided led to NSA utilizing the intelligence provided. The students’ level of expertise shined through as they briefed a room full of subject-matter experts and decision makers, while fielding high-level questions and answering them with the competence of seasoned intelligence analysts. We couldn’t be more thankful to NSA for providing and hosting this event for the intelligence program and being such a great academic partner.”