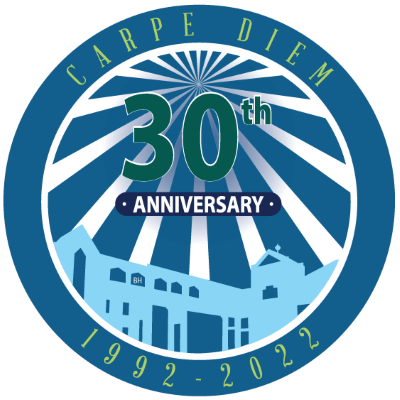 Former and current faculty and staff members, alumni, students—even the pioneering program’s founder Bob Heibel and next-level leader Jim Breckenridge—will be on hand for the festivities.

Barely on campus four months as Intel’s new executive director, Lindy Smart ’11 is pulling out all the stops to host what she calls “a family reunion extraordinaire.” There will be opportunities to engage in exciting panel discussions, share best practices, and enjoy fireside chats, a meet-and-greet with prospective students, an old-fashioned tailgate, and lots more opportunities to reconnect with your favorite Intel people.

For some, that might be retired faculty member Dave Grabelski, who taught for 12 years at Mercyhurst following a career in law enforcement, including 21 years with the Los Angeles Police Department both as a senior homicide detective and as supervisor of the Investigative Gang Unit.

Grabelski, who will be making the trip to Erie from his home in Tucson, Arizona, said, “My time at Mercyhurst from 2005 to 2017 was pivotal in that we developed and grew the program into one of national and international recognition. It will be great to see many of my former colleagues and talk about the old days while sharing ideas on the program’s continued success under Lindy’s leadership.”

Smart said other former Intel staff and faculty members who have indicated they will return for the festivities include Shelly Freyn, Art Mills, Bill Welch, and Linda Bremmer.

“There definitely is a buzz of excitement knowing the best minds of Intel are coming together to reconnect over this significant moment in the Intelligence program’s history,” Smart said. “What makes me even more excited—and proud—is how alumni, faculty, previous faculty, the program founder, students, all departments across Mercyhurst, friends and partners of the program, and especially Dean (John) Olszowka have come together to make this a celebration worth attending.”

Smart will kick off the festivities on Thursday, Sept. 29, at 7 p.m. in Walker Recital Hall when she welcomes “Keynote Speakers” Jacquie Tye ’01, head of research for Facebook App Connections, and Jason Collins ’02, FBI supervisory intelligence analyst serving as the chief of governance for the Office of the Director of National Intelligence. The event will be livestreamed via YouTube. An “Alumni Gathering” in The Roost follows at 8:30 p.m.

Meanwhile, making her way from London to her alma mater is Suki Fuller ’05, whose 16-year career with strategic intelligence and technology has taken her from the U.S. Department of Defense to teaching students in China. An intrinsic part of London’s tech community, she was named by the Financial Times as one of the Top 100 Black/Asian/Minority/Ethnic (BAME) Leaders in UK Tech. Additionally, she was named by Computer Weekly as one of the Most Influential Women in UK IT 2018.

Finnegan will be calling in from London, where he is chief of staff, International, The Vanguard Group. “Through our prep sessions, it’s been great to connect with like-minded colleagues and build on the foundational ideas we learned in the program by adding in all the different experiences we’ve now had in practical situations,” he said.

At 1 p.m., Fuller will cohost a “Fireside Chat” in Walker Reading Room with author and competitive intelligence expert John J. McGonagle. McGonagle is a friend of Mercyhurst’s Intelligence Studies program and recently contributed his library of intelligence books and 11 of his own titles to the program, along with a financial gift. The university intends to honor him during the weekend festivities by dedicating a new library space in Intel’s home on the third floor of the CAE that will take the name of his late wife: Carolyn Vella. The event will be livestreamed via YouTube.

At 7 p.m., the long-awaited reunion of Intelligence Studies’ three visionary leaders, Bob Heibel, Jim Breckenridge, and Lindy Smart, will take the form of a “Leaders Panel Discussion” in Walker Recital Hall and be followed by a reception in the atrium of the CAE. The event will be livestreamed via YouTube.

A highlight of the reunion is the presentation of Challenge Coins. A Challenge Coin is a circular metal piece about the size of a half dollar that features a special design, motto, or insignia, and is given to confirm membership in an organization or group or to recognize special achievement. In this case, a 30th anniversary coin has been specially designed and will be distributed after the panel discussion.

Another distinguished participant on deck for the weekend is Craig S. Fleisher, chief analytics officer and director of Learning & Development for Aurora WDC, one of the world’s leading professional service firms designed to help enterprises develop and leverage intelligence. A founder and former vice president of the Council of CI Fellows, Fleisher will conduct an “Intelligence Workshop” at 11 a.m. on Saturday, Oct. 1, in Sullivan Hall.

Also Saturday in Mercy Heritage Room, prospective students will be welcomed at an “Open House” at 9 a.m., followed at 9:45 a.m. by “Student Briefings” highlighting the intelligence work of students at the university’s Center for Intelligence Research Analysis and Training (CIRAT) and the Innovation Entente Lab (EIL). At 10:15 a.m., a “Student-Recent Alumni Panel” is planned, featuring current students Briana Kurutz and Brentyn Muir and alums Jamilyn Goggin ’21, Marina Boyle ’21, and Kevin Hough ’22.

To register for the main events, visit the Homecoming 2022 webpage.