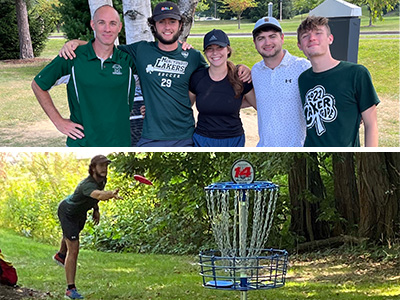 This semester has been a hole-in-one for longtime disc golfer and Mercyhurst Associate Professor of Physics Dr. Joe Johnson.

After more than a year of encouraging students to explore the game of disc golf, he has generated enough interest to register it as an official student club. The Mercyhurst University Disc Golf Club was approved as a Recognized Student Club/Organization (RSCO) at the start of fall semester.

“I think this is a great opportunity for our students to have fun and play a totally different kind of sport,” said Johnson, who besides advising the new club is adviser for the university’s Ultimate Frisbee® Club.

Having evolved as an offshoot of Frisbee®, disc golf is like traditional golf, however, instead of using golf clubs and balls aiming for a hole, disc golfers toss discs and aim for a basket of chains extending from a pole. The object of the game is to complete each station with the fewest number of throws. Generally, a course is made up of 9 or 18 holes.

Johnson has been playing disc golf since 2010. It happened that while he was in South Korea learning Haedong Kumdo, a Korean sword martial arts, a colleague suggested he try disc golf. “I was hooked,” he said. He even won the novice division in his first competition.

“For me, part of the allure is that disc golf is one of the most supportive sports I’ve ever been involved in,” Johnson said. “There’s a great sense of community. Even though everybody is out there to win, we cheer on our competition.”

One of the big advantages of disc golf is that it can be played by everyone from young children to senior citizens. Since it takes very little financial commitment and the learning curve is so quick, disc golf has very few limitations to its growth.

The game’s public appeal has blossomed considerably since the onset of COVID-19 because it is played outdoors and is socially distanced by design. In 2020, the Professional Disc Golf Association reported an 84 percent growth in new members and, through much of 2021, sanctioned more than 6,200 events worldwide. Once seen as little more than a casual hobby, today disc golf is recognized as a legitimate sport, with an estimated 170 colleges and universities fielding teams.

The allure of disc golf is that it can be enjoyed in a relaxed, casual atmosphere or in high-level competition. Mercyhurst students Michael Abadie, Brentyn Muir, Samantha Strom, and Henry Zeller competed in their first disc golf tournament last month at Penn State Behrend and have secured the opportunity to participate in the Mid-Atlantic Regional Qualifier in Clermont, Pennsylvania, in October.

Muir only began playing this summer and is all-in. As a striker for Mercyhurst Men’s Soccer, he has had his share of concussions and is all too familiar with pushing himself to the point of exhaustion. “You don’t have to worry about all that with disc golf,” he said. “It’s good exercise, it’s mentally challenging, but it’s not physically exhausting. It doesn’t require a lot of experience or investment and it doesn’t take that long to get good.”

Johnson, meanwhile, said he is going to start having regular practices soon and suggests that anyone interested in joining the club reach out to him at jjohnson@mercyhurst.edu.