Dan Pora ’96 chalks up an ‘A’ for customer service 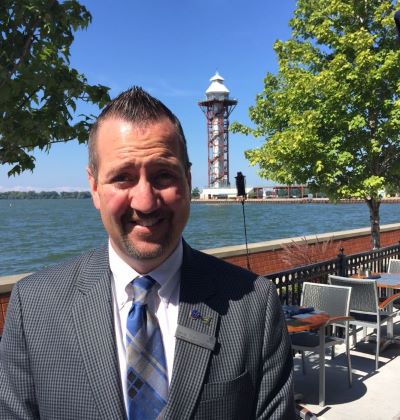 (EDITOR’S NOTE: This year, the Mercyhurst University Hospitality Management program celebrates its 50-year anniversary. Here’s a look at one of its many successful alumni: Dan Pora, general manager, Sheraton Erie Bayfront Hotel. You can read more profiles in Mercyhurst Magazine due out in its new digital format next month.)

As the Tall Ships festival in Erie comes to a successful end, Dan Pora, general manager of the Sheraton Erie Bayfront Hotel, can breathe a little easier.

With Erie’s Sheraton consistently ranked in the top 10 percent of the 195 Sheraton hotels in North America for customer service, Pora knows the dedication it takes to sustain that standard.

When you have all 200 guest rooms occupied and a full-service bar and restaurant operating at capacity, there’s no substitute for the personal touch, something Pora learned at Mercyhurst, where he graduated from its Hospitality Management program in 1996.

Being his third Tall Ships event at the Sheraton, the latest from Aug. 25-28, Pora was well versed on what needed to happen from a preparation and execution perspective. “When it was all said and done, the four-day event once again produced some record-breaking numbers for revenue and attendance,” he said.

This year the Hospitality program celebrates its 50-year anniversary, beginning with a host of celebratory activities during Homecoming, Thursday, Sept. 29, through Sunday, Oct. 2. Check out Homecoming 2022 for details.

In reflecting on his years at Mercyhurst, Pora said he benefitted from the instructional aspects of Mercyhurst’s Hospitality program, but he considered the personal aspects of teaching equally important. He enjoyed teachers who welcomed students’ questions, who acknowledged their input, and who were available—in short, teachers who established rapport with students. “They took the time to help you grow and determine what your needs were; that really stood out for me,” he said.

Pora entered Mercyhurst knowing he wanted a career in hospitality. Growing up, he worked in the field, including summer stints at the Dairy Queen during high school and as a line cook at Ruby Tuesday’s throughout college.

His education, passion, and experience prepared him well for his first job after graduating from Mercyhurst: assistant restaurant manager for the Philadelphia Convention Center Marriott. From there, he set forth on a long career with Marriott that only ended when he had the chance to return to his hometown. He has been GM of the Bayfront Sheraton for the past nine years.

During those years, he has been a treasured friend to Mercyhurst, frequently providing students with internships and career opportunities. “It’s my way of giving back,” he said.