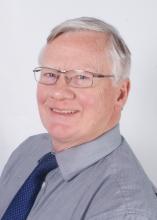 In September 2006, he joined the department after receiving his M.S. degree in applied intelligence from Mercyhurst in 2006. Welch earned his B.A. degree in journalism from Point Park University