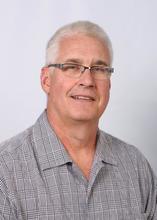 Tom Hubert, Professor of Art, is a lifelong resident of Erie, Pa.  He received his BA in Art Education from Mercyhurst University and his MFA in Ceramics and Ceramic Sculpture with a Minor in Photography from the School for the American Craftsman at Rochester Institute of Technology.

His first 12 years of teaching were part-time as he made his living as a ceramic artist from 1980-1992. He began teaching full-time and was named the Director of the Art Department in 1992, holding this position until to 2001. He was then named Chair of the Art Department and held that position from 2003 to 2008, becoming chair again this year. His resume includes 15 awards in national and regional exhibitions including the Pennsylvania Council of Arts Grant and a National Endowment for the Arts/Mid-Atlantic Art Foundation Regional Fellowship. Tom has exhibited his ceramic work in 10 one-person exhibitions over the last 12 years and has an extensive exhibition record of national and regional juried and invitational shows. His work can be found in numerous permanent, corporate and private collections as well as in wide selection of publications. Tom initiated and has been a regular advisor to the Empty Bowls fundraiser that has brought together the Art Education Club, the Art Therapy Club, the Social Work Club and numerous volunteers to raise thousands of dollars for the Second Harvest Food Bank in Erie, Pennsylvania.