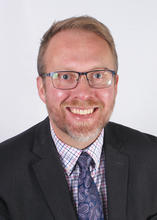 Dr. Richard McCarty is Professor of Religious Studies. He holds a Ph.D. in Religious Studies from the University of Iowa, specializing in religious ethics—ranging from the moral theology of Thomas Aquinas to contemporary liberation arguments about gender and sexual diversities. His first book, Sexual Virtue: An Approach to Christian Ethics (SUNY Press, 2015) examines virtue ethics, Christian scripture, church teachings, and natural law on issues of sexual morality. His second book, Under the Bed of Heaven: Christian Eschatology and Sexual Ethics (SUNY Press, 2021) explores concepts of sexual morality from the perspective of eschatology, considering how eschatological metaphors can reshape Christian thinking about sexual ethics. McCarty has a forthcoming book on Theology and the Paranormal through Fortress Academic/Lexington Books. In it, he examines how paranormal beliefs in North America are shaping religious and moral values, resulting in new visions of ultimate reality and unique ethical paradigms. He is also serving as the content editor for a book on religion, ethics, and the graphic novel for Claremont Press. McCarty’s journal articles and book chapters have covered issues of international human rights, sexual ethics, and academic freedom. His book reviews have been featured in the Journal of the American Academy of Religion, Theology & Sexuality, and the South Atlantic Review.

Passionate about teaching, Dr. McCarty offers several courses in Religious Studies and Ethics, including Contemporary Moral Issues, Religious Perspectives on Human Relationships, Contemporary Folklore, Legends, and Mythology, as well senior capstones in Religious Studies and Ethics, and a seminar on Peace and Justice. He is developing a course on religion and biomedical ethics, while also offering occasional study abroad opportunities through the university’s Office of Global Programs (with past trips to Ireland, France, Italy, Vatican City, and Greece). Active in the life of the university, the wider academy, and the Erie community, McCarty serves as Faculty Senate President of Mercyhurst University, he co-chairs a program unit of the American Academy of Religion, and he holds seats on multiple boards in Erie, while also offering weekly clergy services as an ordained minister of the United Church of Christ.