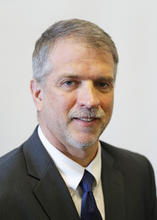 Randy Rinke, Assistant Professor of Business. Randy earned his undergraduate degree in Accounting with a minor in Business Administration from Mercyhurst University and his MBA from Gannon University.

Randy started as a staff accountant at Mercyhurst in January 1993, and then served as manager of student accounts from 1997 to 2000, when he then began teaching full-time at Mercyhurst North East. He has taught classes at North East and the main campus in Erie.
In addition to teaching, Randy worked with publishing companies to review and edit multiple textbooks and has done contract work for the Municipal Police Training Academy and Constable Training program. Randy has served as treasurer for the U.S. House of Representatives, Pennsylvania Third District, a political campaign, a congressional race, and for a member of the Erie County Council. At Mercyhurst North East, he was Faculty Senate President and program director for the business department. In 2017, Randy received the Teaching Excellence Award. He has served on numerous Mercyhurst committees and was named Associate Dean of the Walker College of Business from Spring 2018 to 2021.