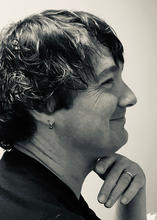 Matthew Christensen, from Salt Lake City, UT, began his training at 17 with former Ballet West dancer Gary Horton, and continued at the Ballet West Conservatory and the University of Utah, where he was the recipient of the Willam F. Christensen scholarship, majoring in ballet performance. He attended summer programs on full scholarship at Ballet West, LA Classical Ballet, and Boston Ballet. Two of his earliest and most influential teachers were NYCB principal dancer Conrad Ludlow and the late Willam F. Christensen. He has also studied with notable teachers Sharee Lane, Bené Arnold, Attila Ficzere, Devon Carney, Bruce Caldwell, Marc Borchelt, and Mark Lanham. As a principal dancer with Nashville Ballet, he was coached by Royal Ballet first soloist, the incomparable Elaine Thomas.

While at the University of Utah, Matthew quickly rose to the performance-level Utah Ballet, where he had the opportunity to perform the wedding pas de deux from Paquita, Act III; Michael Smuin’s Romeo and Juliet, balcony pas de deux and Eternal Idol, pas de deux; and Violette Verdy’s Divermento. He also had the privilege of performing in original choreography by Conrad Ludlow, Attila Ficzere, Darrell Yeager, and Bruce Caldwell. Additionally, Matthew was asked to perform the role of the Sugar Plum Cavalier as a guest artist in various productions of The Nutcracker throughout the Intermountain West while at the University of Utah.

Matthew’s first professional contract, after five years of intensive ballet training, was with Indianapolis Ballet Theatre, where he was requested as the Lead Cavalier in the Rose Adaigo by both Tatiana Pali, Varna gold medalist, and former Boston Ballet principal dancer Karen Scalzitti in their performances of The Sleeping Beauty. He was coached for the part by Russian prima ballerina Irina Kolpakova; he later performed in a gala to honor Kolpakova, sharing the stage with notable dancers including Evelyn Hart from the Royal Winnipeg Ballet, Rex Harrington from the National Ballet of Canada, Amanda McKerrow of ABT, and Damian Woetzel from New York City Ballet, among others from the Paris Opera Ballet, Bolshoi Ballet, and Kirov Ballet. With Indianapolis Ballet Theatre, Matthew also toured Alberto Alonso’s Carmen in the United States and throughout Taiwan, and performed in the world premiere of artistic director Eldar Aliev’s 1001 Nights. He was coached by Aliev in the role of Von Rothbart in Swan Lake, for which he was famed at the Kirov.

After two seasons at Indianapolis Ballet Theatre, Matthew joined Eugene Ballet/Ballet Idaho. The company toured extensively throughout the Intermountain West and the Pacific Northwest regions, and he was promoted to principal dancer in his second season there. Matthew had the opportunity to dance principal roles in The Nutcracker, Swan Lake, and The Sleeping Beauty, as well as originate roles in contemporary repertoire by artistic director Toni Pimble and guest choreographers.

Matthew and his wife, Jennifer McNamara, joined Nashville Ballet in 2001, where they often danced together. He has been noted for his exquisite partnering skills and effortless male technique in performances of Prince Désire in The Sleeping Beauty, Prince Siegfried in Swan Lake, Albrecht in Giselle, the Sugar Plum Cavalier in The Nutcracker, The Golden Slave in Dennis Spaight’s masterpiece, Scheherazade, the Warrior in Salvatore Aiello’s The Rite of Spring, and the title roles in Paul Vasterling’s Romeo and Juliet and Robin Hood.

In 2005, he received the Tennessee Arts Commission’s Fellowship in Dance. He was on the faculty of the Ensworth School of Dance, a guest teacher for the Vanderbilt Dance Program, and has taught master classes throughout the Southeast and Intermountain West. For the past five years, Matthew has been the ballet master for Centennial Youth Ballet and the primary upper division teacher for Metro Nashville Parks’ Dance Division; he is passionate about providing a high-quality classical ballet education to all students, regardless of socio-economic status or long-term career goals. He has staged The Nutcracker; Giselle, Act II; Swan Lake, Act II; Paquita, Act III; and the dream scene from Don Quixote, in addition to choreographing original works for his students. Matthew is delighted to be moving to Erie, and will be joining the faculty of Mercyhurst University as an adjunct professor of dance.