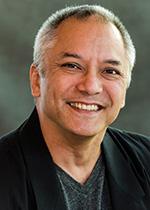 Mark Santillano has enjoyed a rich and varied career in the arts (primarily as a dancer, choreographer, and educator). With a background in music, gymnastics, and martial arts, Mark earned a BFA in Dance and BS in Communications from Southwest Missouri State University, and his Masters from Wesleyan University.

As a dancer, he toured the world, performing in North and South America, Europe, and Asia. While a member of Pilobolus Dance Theatre, Mark was dance captain, soloist, choreographic collaborator, danced at the Olympics, appeared on national television and in commercials, and won an Emmy Award. He was also a company member of Indianapolis’ Dance Kaleidoscope where he worked with Ohad Naharin, Mark Dendy, Kathryn Posin, and many others. Mark is a proud member of Actor Equity Association whose credits include lots of dinner theater as well as national and/or international tours of The King and I, West Side Story, and over two years with A Chorus Line.

Along with his wife, Solveig Santillano, Mark is co-director, co-founder, and choreographer of SoMar Dance Works. Established in 1999, SoMar has received numerous grants from the Pennsylvania Council on the Arts and Erie Arts and Culture. The company is in-residence at Mercyhurst and boasts a repertory of over one hundred works.

Mark is also the proud recipient of the inaugural Erie Arts & Culture Artist Fellowship made possible by community contributions to the annual Arts & Culture Campaign and the Erie Arts Endowment.

As an educator, Mark served for two years as an Artist-in-Residence at SMSU (his alma mater), and is currently an Assistant Professor at Mercyhurst University where he’s worked since 2000. In addition to teaching Modern, Jazz, Tap, Musical Theatre Dance, Contemporary Partnering, Choreography, Dance Appreciation, and Senior Pro-Seminar, Mark is resident photographer, videographer, and media archivist for the Mercyhurst Dance Department.

When not in the studio, Mark serves on the board of directors for the American College Dance Association; was the president of the Erie Dance Consortium; serves on Erie Arts and Culture’s Erie Dance Film Festival task force.