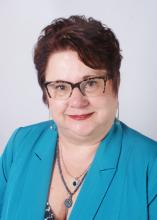 Jodi Staniunas Hopper is an Associate Professor of Art and the Chair of the Art Department, a position she has held for the last 6 years. A dedicated Mercyhurst alum, Ms. Hopper received her B.A. in Art/Graphic Design from Mercyhurst University and her Master of Fine Art in Design and Advertising from Marywood University in Scranton, Pennsylvania. She teaches courses in Computer Design Basics, Vector Illustration, Branding, and Design History.

In 1989, she began her career in graphic design as the art director for the local public radio/TV station, WQLN. In 1992 she joined the marketing department at National Public Radio in Washington, D.C., where she eventually became art director. Moving back to Erie five years later, she was hired as the first web designer for Cyberink-lp, which went on to create Erie's newspaper site, Goerie.com. She has continued to work as a designer throughout her teaching career. Ms. Hopper has exhibited her fine art for more than a decade; most recently, she is combining her passion as a creative seamstress/costume designer with photography. She can now add author to her list of accomplishments as she has written the forthcoming book, “Learning Vector Illustration with Adobe Illustrator,” a title viewable on Amazon.

Her role in the Mercyhurst Art Department began in 1998 when she took over the Graphic Design Program, developing the curriculum from a handful of programs in publication design to a major that includes website design and development as part of the publication focus. In addition to chairing the Art Department, Ms. Hopper advises design students on course selection, internships, employment, and minors.