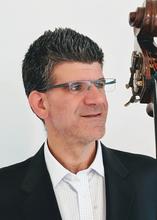 Gino Faraci is a freelance double bassist, teacher, and chamber music impresario living in Pittsburgh, Pennsylvania. Prior to moving to Pittsburgh in 2005, Gino served as the assistant principal bass for the Eastern Connecticut Symphony Orchestra and performed with numerous orchestras in the northeast including the Connecticut Grand Opera Orchestra, Binghamton Philharmonic, Ridgefield Symphony, Orchestra of New England, and Norwalk Symphony. He was a member of the Verbier Festival Orchestra in Switzerland from 2001 to 2004 performing internationally in Europe, Asia, and South America under the direction of conductors James Levine, Charles Dutoit, Wolfgang Sawallish, Christoph von Dohnanyi, Paavo Jarvi, and Yuri Temirkanov. Gino performed with the Italian chamber ensemble Sinfonietta Umbria at Carnegie Hall and has played with renowned soloists Dimitry Sitkovetsky, Vadim Repim, and Lang Lang. He has performed chamber music at Caramoor and has played bass in several Off Broadway musical productions.

In 2010 Gino founded Classical Revolution Pittsburgh, an internationally recognized chamber music organization committed to taking music out of the concert hall and performing high quality classical music concerts in accessible venues such as bars, cafes, galleries, and public spaces. In recognition of his work with Classical Revolution Pittsburgh, Gino was featured in an article in the Pittsburgh Post Gazette for their “Person of Interest” column in April of 2012.

In addition to performing, Gino is a committed teacher. He is the orchestra director at Sewickley Academy, a co-educational college preparatory independent school in Sewickley, PA where he teaches strings at the elementary, middle, and high school levels. He has been a double bass coach for the Pittsburgh Youth Pops Orchestra, Bridgeport Youth Orchestra, Manhattan School of Music Preparatory Division, and maintains a private double bass studio. Not limited to music, Gino is also a ski instructor at 7 Springs Mountain Resort where he teaches group and private lessons to skiers of all ability levels from beginner to expert.

Gino Faraci studied double bass with Timothy Cobb and Jeffrey Turner. He is a graduate of the Manhattan School of Music where he earned a Bachelor of Music degree in Double Bass Performance and Master of Music degree from the Orchestral Performance program. Beyond music, his favorite activities are running and skiing. Gino lives in the Regent Square neighborhood of Pittsburgh with his wife Tanya and daughter Nora.