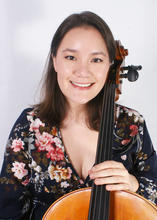 Eleanor
Lee
M.M.
Private Lesson Instructor, Cello
D'Angelo 34
elee@mercyhurst.edu
814-824-2394
Hailing from Washington, Pennsylvania, Eleanor Lee is on the faculties of Mercyhurst University and Sullivan Conservatory in Erie, PA and is a New World Symphony Finalist. She holds a Master’s degree in Cello Performance and Suzuki Pedagogy from the Cleveland Institute of Music (CIM), where she studied with Stephen Geber. During the 2019-2020 season, Lee served as Principal Cellist of the Ashland Symphony Orchestra and subbed with The Cleveland Orchestra. For two years, Lee taught private lessons at the Cleveland School of the Arts, aiding in her students' acceptances into institutions like Cleveland State University to major in music. Prior to CIM, Lee was a member of The Orchestra Now at Bard College, where she earned a Master's of Music in Curatorial, Critical, and Orchestral Performance Studies, performing as both a section and principal player in prestigious venues around New York City, including Carnegie Hall, Alice Tully Hall, and Jazz at Lincoln Center. Lee holds a Bachelor's degree from the Eastman School of Music in Rochester, New York, where she studied with renowned pedagogue, Alan Harris. She is an avid chamber musician, actively involved in community outreach projects, and a champion of diverse composers.
sfy39587stp16