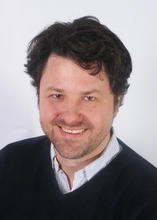 Prior to being appointed his position at Mercyhurst, Craig Stevens was director of Medical Music Therapy at Hamot Hospital in Erie, Pa. There his work included patient assessment, treatment planning, and application of Music Therapy with patients in all areas of the hospital. A majority of his work centered around Neurology, Oncology, Palliative Care, and Intensive Care patients.

Craig Stevens MA, MT-BC, NMT is the founder and director of the Music Therapy program at Mercyhurst University. His duties include the building and teaching of all the required Music Therapy courses, which offer the students a wide range of theoretical and clinical foundations, as well as application through in-the-field training. He also teaches the Music Technology classes.

During his time at Hamot, Mr. Stevens also forged a working relationship as a Neurologic Music Therapist with Health South Rehabilitation, allowing for a continuum of care from an acute care setting to a neuro-rehabilitation setting for those living with Stroke, Traumatic Brain Injury, and Parkinson's Disease. His graduate work focused heavily on Developmental and Intellectual Disabilities as well as Teen Mental Health. Currently, Craig Stevens maintains a part-time private practice with his company Lake Erie Music Therapy Services, which focuses mainly on Neurologic disorders.

Mr. Stevens has a Bachelors degree from the University of Dayton in Journalism and Psychology, a second Bachelors degree in Audio Recording and Music Business from Middle Tennessee State, and holds a Masters Degree in Music Therapy and Counseling from Naropa University in Boulder Colorado. Mr. Stevens also received his certification in Neurologic Music Therapy from Colorado State University. He is a published songwriter/producer and many of his compositions have been licensed into film and television productions around the world. In his spare time, Mr. Stevens like to produce original music in his recording studio, scuba dive, read Music Therapy research journals, and go on adventures with his wife.