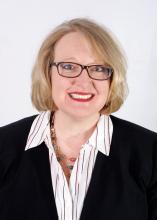 Dr. Riley Brown has presented at numerous national and international conferences, including the Society of Early Americanists, the International Conference on Narrative, the American Literature Association, and the Popular Culture Association among others.

Dr. Riley Brown earned her M.A. and Ph.D. from the University of Mississippi and her B.A. from the University of Arkansas. Her scholarly expertise is in American literature before 1900, U.S. women's writing, and the history of race in the United States.  In addition to teaching early and nineteenth-century American texts, Dr. Riley Brown also teaches literature of the American South. She is the co-editor of the anthology Liberty's Captives: Narratives of Confinement in the Print Culture of the Early Republic(2006) from the University of Georgia Press, a collection of critically-introduced first-person narratives that contributed to the formation and articulation of national identity. Professor Riley Brown is the Dean of of Hafenmeier College of Humanities, Arts, and Social Sciences.