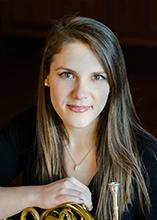 Chelsea
Nelson
M.M.
Private Lesson Instructor, French Horn
D'Angelo 34
cnelson2@mercyhurst.edu
814-824-2394
Chelsea Nelson is a native of Erie, PA. She is happily returning to Erie after a decade of pursuing a music career performing and teaching in several major cities in the United States. Her first entry into the classical music scene was her studies at the Eastman School of Music where she studied horn with Peter Kurau and played in a myriad number of ensembles from orchestras to operas, to film music ensembles and chamber music. After completing her bachelor's degree, she studied at Northwestern University with Gail Williams and Jon Boen. In Chicago, Chelsea had the opportunity to perform with the Northwestern University Symphonic Wind Ensemble and record Reflections in 2017. After graduating with her Master's degree, Chelsea moved to Texas, where she freelanced and performed with the Greenbriar Brass Quintet and several Texas Orchestras including the San Antonio Symphony.
sfy39587stp16