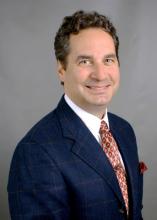 Brian Sheridan M.A. ‘87, assistant professor and Mercyhurst graduate, has taught in the Department of Communication since 2004, following a long award-winning career in broadcast journalism as producer, reporter, and anchor. Brian is best known for being the only reporter to witness the mysterious death of pizza delivery man Brian Wells in Erie. News outlets from Great Britain, Japan, and Australia featured his work concerning the 2003 “Pizza Bomber” story. He is also seen in the Netflix documentary “Evil Genius.”

During his time at Mercyhurst, Brian co-authored the book “America in the 1930s” for Syracuse University Press, as well as contributing chapters and articles to textbooks and journals. His writing continues to be published in magazines such as The Syncopated Times and Lake Erie Lifestyle.

Brian brings his expertise in writing and performing to various classes within the major including Media Performance, Multimedia Writing, Film Appreciation, and Interpersonal Communication. Brian used his study of mindfulness and meditation with the late Zen Master Thich Nhat Hahn to create the popular Mindful Communication class. He also is the faculty adviser for the on-campus, student-led media organization Laker Student Media (LSM).