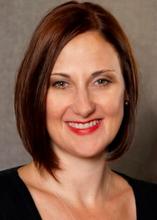 Angela McDonough DiFiore has over twenty years experience in the field of dance as a performer, choreographer, and educator. She holds a BFA in Dance from New World School of the Arts and an MFA in Dance (Choreography and Performance), from Florida State University. Angela has presented her choreographic work in performances at FSU’s Days of Dance in Tallahassee, Florida, the Florida Dance Festival in Miami Florida, Florida Dance on Tour, Gainesville, Florida, Broward College, Ft Lauderdale Florida, Santa Fe College, Gainesville, Florida, College of Central Florida, Ocala, Florida, University of Florida, Gainesville, Florida, Mt San Jacinto Community College, Mt San Jacinto, California, and Pro Danza Italia in Montescudaio, Italy. From 1998-2003 Angela served as co-director of the dance program at Broward College in Ft. Lauderdale, Florida. At Broward College she had the opportunity to teach Ballet, Modern and Jazz as well as choreograph for the BCC Dance Ensemble, direct concerts, develop dance program curriculum and mentor students.

She has performed throughout the south Florida region with such groups as Dancesynergy, Corps Chameleon, Millennium Dance Syndicate Ballet Flamenco La Rosa and Kokoflux, Fuzion Dance Artists, and other independent artists. While completing her MFA in dance at Florida State University, Angela had the opportunity to dance in the work of choreographers such as Lynda Davis, Terry Creach, Susan Marshall, and Brendt Schneider. She was also an active member of Dance Repertory Theatre, as a performer, rehearsal director and company assistant. While living in New York City, Angela performed with The Ugly Company, directed by Tennille Lambert at various performances at the Cunningham Theatre Space, Movement Research, and Dance Theater Workshop. She also taught for FSU in NYC (a dance program in NYC through Florida State University, designed for undergraduate Seniors and Masters students), leading the Movement/Studio element “Class as a moving body”. Angela worked closely with Dr. Sally Sommer to connect the studio element with the history and research portions of the FSU in NYC experience. Angela was an organizer and contributor to the Florida Waterways Dance Project 2011, and the National Water Dance Project 2014 led by Kristin O’Neal, in collaboration with University of Florida. In 2016 Angela was a guest choreographer, collaborator and organizer for the National Water Dance Project “The Ripple Effect” in collaboration with Solveig Santillano and Mercyhurst University.

Last year, Angela directed the creation and performance of University of Florida, School of Theatre and Dance National Water Dance 2018. In addition to dance, Angela has a great interest in yoga and has cultivated her own personal practice since 2003, and is a RYT certified yoga instructor and a member of Yoga Alliance since 2010. She created a yoga course designed specifically for dancers, at the School of Theatre and Dance at the University of Florida in 2011. Angela has taught both dance and yoga at Santa Fe College, University of Florida, the College of Central Florida, Soma Movement Arts, SUNY Fredonia and Perry Mansfield Performing Arts School and Camp. Angela is currently serving on the board of directors of Erie Dance Consortium.