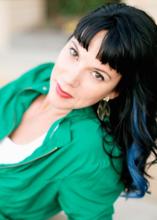 “Teena Marie” Custer is a b-girl and hip hop dance theatre artist. Teena battles and performs internationally with her crew, Venus Fly Trap, an all female street dance crew. Her solo “The Be-Girl Diaries” was performed at the Breakin’ Convention in London, England, and in addition to theatrical works, she has won underground freestyle dance battles such as Underground Movement 5, Enter the Cypha I, and was also seen on an episode of MTV’s MADE. Under the directorship of Erika Randall Beahm, Teena was also a featured dancer and assistant choreographer with world champion ballroom dancer/choreographer Melanie LaPatin for the feature film “Leading Ladies” starring Benji Schwimmer.

In addition to being a part of hip hop culture, Teena has an extensive background in contemporary dance. She earned a BA in Dance from Slippery Rock University and an MFA in Dance Performance from The Ohio State University. She has been on faculty at both schools where she taught hip hop styles and contemporary dance, and has also been on faculty at the prestigious American Dance Festival and Interlochen Summer Arts Camp. She has choreographed hip hop dance theatre pieces for various university dance programs and companies, and has performed with Dance Alloy, Attack Theatre, and Ursula Payne. She also represented CM² (Columbus Movement Movement) in Dance Magazine’s “Top 25 to Watch” in 2007.