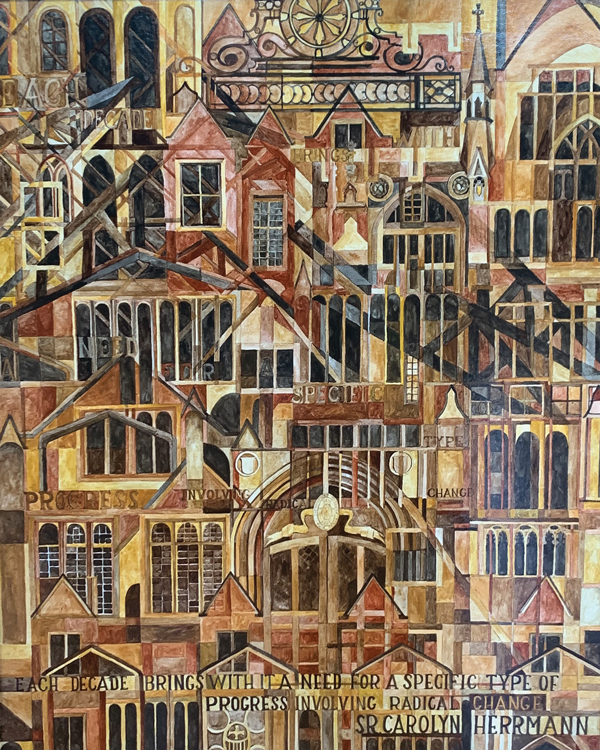 “Each decade brings with it the need for a specific type of progress involving radical change.”

When a discerning Sister Carolyn Herrmann made that statement just prior to her retirement as Mercyhurst College president in 1972, she was reflecting on the turmoil that marked the transition from the late 60s to the early 70s and what it meant for a Mercy institution in such a rapidly-changing world.

When Vice President for Mission Greg Baker chose that sentiment as inspiration for a painting the university commissioned local artist Jamie Borowicz to create last spring prior to the pandemic, little did he know how authentically Sister’s words would resonate today.

“I imagined the message would call for wisdom, courage, and flexibility as we prepared for the demographic challenges in the volatile higher education market,” Baker said. “I did not know that Sister’s quote would grow even more timely, especially in light of the pandemic and renewed movements for racial justice.”

Mercyhurst President Michael Victor said the piece created by Borowicz, a 1982 Mercyhurst alumnus and husband of Spanish Professor Alice Edwards, is the first effort on the part of the Mission Office’s plan to introduce more contemporary Mercy-related images on campus. With its eclectic blend of rooflines, rafters and windows on campus, the image asks us to consider all that we point toward as an institution.

Borowicz interprets his piece this way:

“From the first time I saw Mercyhurst as a visiting prospective student, I was struck by its aesthetic. That massive block of Old Main sitting on the rise, upon closer inspection, was also beautifully intricate. Over 40 years later I am still taken by the view from the gates. I wanted to convey something of that quality in this work, which breaks up the architectural masses on both the exterior and interior of the building. Parts of the chapel and the main buildings are realigned and superimposed, but still hopefully recognizable to anybody who knows the school. Like Old Main, for so many years, Sister Carolyn Herrmann was the heart of the college/university, a powerful and inspiring presence, in the life of the school.”

Indeed, Baker said, it was Sister Carolyn who had the courage to make the then-unpopular move in 1969 to turn the college coed, to greatly expand lay leadership across the institution, and to speak and act boldly on behalf of the institution on critical issues like racial injustice.

The painting is expected to debut in Old Main and eventually take its permanent place in the newly renovated Mercy Heritage Room, which was dedicated last winter. Situated in Sullivan Hall, it is one of the university’s prime meeting halls, home to lectures, presentations, social gatherings, and media events. Its beginnings date back to the 1990s and the installation of two stained glass windows: one illustrating the college seal, and the other depicting the founding of the House of Mercy on Baggot Street in Dublin. Both art works evoke the university’s roots and ultimately led to naming the space Mercy Heritage Room.

“Although the university has changed greatly over the years, our spirit has not, and that is what we celebrate with this newly renovated space and this new art work,” Victor said. “In a year like 2020, hope and inspiration are vital. We are blessed to work at an institution that was built during challenging times and continues to prepare our students for challenging times.”