Military pilot soars toward career in teaching via Mercyhurst 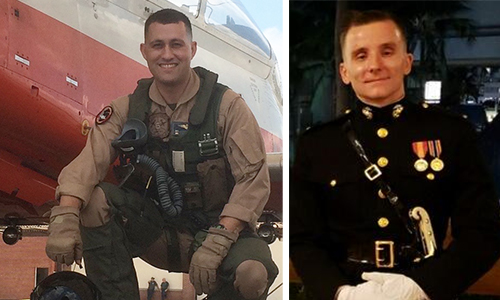 As a flight instructor, U.S. Marine Corps pilot with two tours in Afghanistan, and first officer for American Airlines, Michael Whiteford doesn’t stray far from the cockpit these days. But that could change once he earns his master’s degree in Secondary Education from Mercyhurst University, where he is the first student to participate in the Troops to Teachers (TTT) program at the university.

Mercyhurst is one of only three universities in Pennsylvania approved as a host school for Troops to Teachers, which was established in 1993 to assist transitioning service members and veterans in beginning new careers as K-12 school teachers in public, charter, and Bureau of Indian Affairs schools.  Mercyhurst is also designated as a Purple Heart University, one of only two in Pennsylvania, for its level of services for veterans.

“With a nationwide teacher shortage looming and thousands of veterans looking for job opportunities, this initiative could not have come at a better time,” said Mercyhurst TTT Coordinator and Chair of Graduate Secondary Education Dr. Amy Burniston, who reported that six students have already begun the program and another four are slated to start spring semester when the university will enact a special tuition rate for all TTT participants. They will be charged $515 per credit, rather than the standard $830 per credit, a savings of 38 percent, reported Travis Lindahl, director of Graduate and Professional Admissions at Mercyhurst.

The Mercyhurst program, he continued, is a one-year Master of Science in Secondary Education degree leading to Pennsylvania Department of Education certification in either math, physics, general science, earth science, biology, chemistry, English, or social studies.

“These men and women put their lives at risk on our behalf while serving our country, and we owe them an enormous debt of gratitude. Mercyhurst is eager to do its part in ensuring their successful integration into life beyond the military.”

What is unique about the Mercyhurst program is that it is fully online and the university considers an applicant’s entire career in offering life experience credit, which reduces the timeline to program completion and affords a higher degree of flexibility to balance work and family life.

And that’s what piqued the interest of Whiteford, an Allentown resident who is juggling many responsibilities, including a commercial aviation career, his obligation as a pilot with the military reserves, and his family, including his wife and three children, ages 2, 4 and 6.

For Whiteford, a career in education is a long time coming. Since his youth, he considered teaching a natural calling, following in the footsteps of his father, who taught high school for 40 years.

But then, 9/11 happened. It was his junior year in college. He was pursuing a degree in social studies education and had already done his student teaching. But, after 9/11, he chose to serve, and joined the U.S. Marine Corps. He had only planned to serve a brief time, but 13 years quickly came and went.

It was then that his career as a pilot began and, once retired from active duty, it seemed a natural path to resume, so he pursued commercial aviation. Still, he had that hankering to teach and, upon discovering Troops for Teachers, knew that it was an opportunity he had to seize.

“I’m enjoying Mercyhurst's program,” Whiteford said. “The ability to do this online is very helpful, actually, as I can work my class schedule around helping my wife out with the kids.”

Mercyhurst Veterans Services Coordinator Christian Constantine sees this latest program offering as one that promises to be highly appealing to many of today’s veterans. In fact, he is considering pursuing it on a part-time basis so as not to interfere with his responsibilities at Mercyhurst.

“Were I to pursue my master’s through the Troops to Teachers program, it would afford me the flexibility to do it at my own pace,” Constantine said. “It would help me in my current position and, should anything change in the future, it would provide me with the credentials to obtain a teaching position.”

Erie native Connor Baughman, who is presently holding a full-time substitute position at Meadville Area Senior High School, began his master’s degree in Secondary Education at Mercyhurst in 2017, but was commissioned by the Marine Corps before finishing. After two-and-a-half years of active duty and currently a reservist, Baughman said the transition from military life back to his educational path has been “seamless.”

He said the TTT program affords him not only the flexibility to balance his many duties – teaching, serving in the reserves, and taking classes – but it provides a high level of support.

“From the very beginning, the dedicated manpower devoted to supporting veterans at Mercyhurst has made a big difference,” Baughman said.

The TTT program offers counseling and referral services to support participants in meeting education and licensing requirements to teach and subsequently helps them secure a teaching position. Since 1993, more than 100,000 veterans have successfully transitioned to a career in education. Since inception, oversight and funding have been shared between the Departments of Defense and Education. The program at Mercyhurst is funded through a grant from DANTES, administered by the Pennsylvania Department of Education.

“As a veteran spouse, I am elated that Mercyhurst is participating in the Troops to Teachers program,” Burniston said. “Skills such as perseverance, leadership, integrity, and commitment that our veterans develop during their military service are often the same skills that are foundational to effective teaching. I am humbled for the opportunity to help those who desire to serve our nation yet again by obtaining teacher certification and applying their valuable skills and experiences to students who need them the most.”