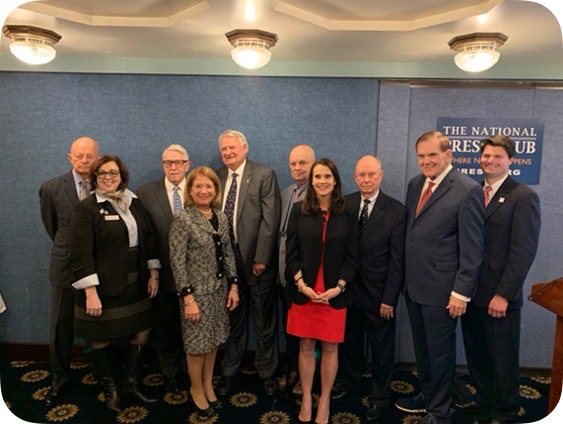 Mercyhurst University, widely known as a pioneer in the field of intelligence studies, has been tapped to house the U.S. Intelligence Community Hall of Fame.

Mercyhurst and its partners hosted a kickoff reception for the Hall of Fame project on Tuesday, Feb. 25, from 6 to 7:30 p.m., at the National Press Club in Washington, D.C.

The Baker Award recognizes individuals who have made extraordinary contributions to the intelligence and national security affairs of the United States.  Among the past recipients are: Leon Panetta, former secretary of the Department of Defense and director of the CIA; George J. Tenet, former CIA director; and former Secretary of Defense Robert M. Gates. This year’s recipient is Susan M. Gordon, former principal deputy director of National Intelligence. She will be honored on June 12 in Washington, D.C.

Mercyhurst’s Intelligence Studies program, which was founded in 1992, is known as the first non-governmental initiative of its kind in the United States. Since then, the Ridge College has been a pipeline for intelligence professionals for both government and private companies. Today, its graduates are represented in all 17 IC organizations.

Among the graduates present at last night’s event was Maggie Hackney ’19, an Intelligence Studies and Political Science major while at Mercyhurst. She is currently working for the government in D.C.

“The US Intelligence Hall of Fame deservedly recognizes established intelligence and national security professionals whose selfless contributions have ensured our nation’s safety,” Hackney said. “Mercyhurst alumni are honored to be affiliated with INSA and the renowned William Oliver Baker Award. With its INSA partnership, Mercyhurst once again expands the nexus between the national security field and academia. I look forward to all Mercyhurst and INSA will accomplish together moving forward.”

Erie native Jeremy Young, president of the multimillion-dollar technology company, Federal Resources Corp. (FRC), who moved his headquarter from northern Virginia to downtown Erie two years ago, has signed on as the first underwriter of the project.

“We are excited to have the opportunity to be a sponsor of the Intelligence Hall of Fame,” Young said. “The ability to recognize selfless leaders who have given their career and life’s work to protect our nation and the world is truly an honor.”

Plans call for Mercyhurst to renovate space in its library to make way for the Hall of Fame; the library is also home to The Thomas J. and Michele Ridge Collection. The space will be equipped with professionally designed exhibits and high-tech programming.

The funding will also provide for a “Scholar in Residence” at Mercyhurst, through which each year’s honoree is invited to campus for a week to interface with students of the Ridge College and others.

Meanwhile, Gov. Ridge, who was instrumental in launching this initiative, had this to say: “Long before I became affiliated with Mercyhurst University, it had established itself as a frontrunner in the field of intelligence studies education. To be the namesake for the Ridge College of Intelligence Studies and Applied Sciences and to have the university house my archives is an honor. With the university’s innovative efforts to prepare the best possible intelligence analysts in defense of our country, I can think of no better place to establish the intelligence community’s Hall of Fame.”

About William Oliver Baker (from INSA)

Dr. Baker was a prominent scientist, former head of Bell Labs, a trusted advisor to five U.S. Presidents, a director and advisor to multiple philanthropic foundations and educational commissions, and a mentor to scores of renowned scientists. During his nearly 25 years with Bell Labs, Dr. Baker and his team made significant discoveries in telecommunications including the laser, satellite systems, and the UNIX computer operating systems, among many others, which set the foundation for the robust technologies and platforms we use today.

In 1959, at President Eisenhower’s request, he developed a plan for the establishment of the Defense Communications Agency, presently the Defense Information Systems Agency. Baker continued to serve his country on the President’s Foreign Intelligence Advisory Board (PFIAB) for multiple presidents beginning in 1956. Dr. Baker also served on the National Security Agency’s Scientific Advisory Board for 20 years. In 1982, Dr. Baker was presented with the National Security Medal by President Ronald Reagan to honor his tremendous contributions.

Dr. William Oliver Baker’s distinguished career is the embodiment of the INSA spirit and mission. By leading the effort to unify the public and private sectors in the name of national security, Dr. Baker effected profound change in national security and intelligence.