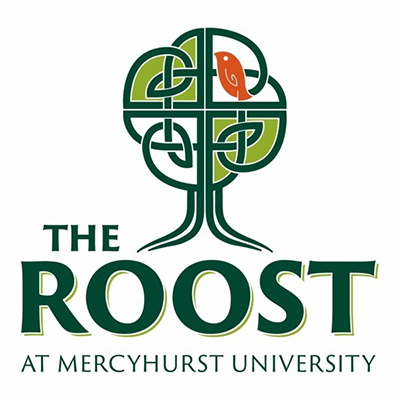 They call it Caffrey’s at Marquette, McGurk’s at St. Louis University, O’Rourke’s Public House at the University of Notre Dame and on Friday, March 15, Mercyhurst University joins the club with its unveiling of “The Roost.” Doors open to the college community at 5 p.m., just in time for the St. Patrick’s Day holiday weekend.

When Mercyhurst President Michael Victor announced plans to convert a section of the Laker Inn into an Irish pub last year – part of his overarching plan to create a college environment where students would have as many of their needs as possible met on campus – he knew just where to go for authenticity. Who better than native Irishman, Mercyhurst Hospitality Management alumnus, and successful Erie restaurateur John Melody? The founder and former owner of Molly Brannigans Irish Pub in downtown Erie, Melody now owns four U-Pick-6 establishments across Erie County, and is working on a new restaurant on the bayfront.

Together, Melody and Betsy Frank, Mercyhurst’s director of executive office projects and events, created the entire look of the space, everything from the dark-hewn leather and plaid furniture to uncommon Irish bric-a-brac. Several eye-catching pieces come directly from Ireland, including a mantle over the fireplace and an antique apothecary cabinet.

Taking pains to seek inspiration from its Irish roots as well as its Mercy heritage, Mercyhurst chose to name its pub, The Roost, which references what many loosely identify as the college’s first student union. The Roost was a chicken coop situated behind Zurn Hall during the 1930s, which Mother Borgia Egan allowed a group of young women to transform into a campus lounge where they would be allowed to smoke. The students redecorated the coop with plumbing, a snack bar and a fireplace.

The Roost 2.0 includes a fully appointed bar and restaurant staffed by employees of the university’s food service vendor, Parkhurst Dining, as well as an adjacent conversational setting with a rustic stone fireplace anchored by plush leather couches. Named “The Playwright Snug,” pictures of famous playwrights adorn the walls along with eclectic items from Melody’s collection of Irish memorabilia.

Besides House cocktails like the Irish Mule and Four Leaf Clover, the Roost has both draught and bottled beers along with wine. The menu offers Reuben Puffs, Fish & Chips, the Roost Burger, an assortment of Create Your Own Sandwiches, and much more, including decadent desserts like Chocolate Trifle, Lemon Cheesecake and traditional Irish Coffee.

The pub will be open to all guests on campus, but will only serve alcohol to those 21 and over. Hours are Sunday through Wednesday, 5 to 10 p.m., and Thursday through Saturday, 5 p.m. to midnight.