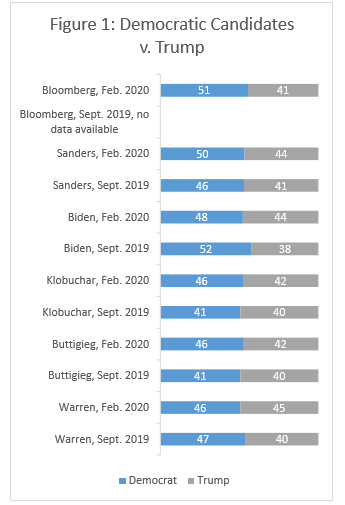 In the fourth iteration of a poll gauging Erie County voter perception of President Donald Trump, released in September 2019 by the Mercyhurst Center for Applied Politics (MCAP), Democratic contender Joe Biden held a hefty 14-point lead over Trump while Elizabeth Warren topped him by seven points. In today’s release of the last of five such polls, their leads have all but evaporated, mirroring national trends.

A majority of the voters in this historically blue county that swung red for Trump in 2016 say that if the presidential election were held today, they would choose Michael Bloomberg over Donald Trump (51%-41%). His 10-point lead marks the largest advantage of any of the Democratic contenders.

Like Bloomberg’s lead, Bernie Sanders’ six-point advantage over Trump is outside the margin of error for this poll.  Other leading Democrats, including Biden and Warren, best the president in hypothetical matchups, but their leads are within the margin of error (+/-4.6).

“Less than four years ago, Erie County voters helped Trump win the presidency, so a tightening of the race was entirely expected,” said MCAP Director Joe Morris. “What wasn’t expected is just how quickly Biden’s and Warren’s leads would evaporate. Whether Bloomberg’s lead over Trump proves more durable than Biden’s or Warren’s also will depend on whether he can withstand the scrutiny that comes with being a frontrunner.”

In assessing voters’ approval or disapproval of the 14 major issues raised in this series of polls, the most recent poll reflects a majority or plurality approval in only four instances: the economy, terrorism, national defense, and illegal drugs. However, a majority of voters disapprove of his handling of issues including international relations, America’s infrastructure, immigration, health care, gun violence, and the environment. A plurality of voters disapprove of the way he is handling taxes, trade, Social Security, and gun control.

“When it comes to his handling of the economy, voters give Trump high marks,” Morris said. “As long as the economy holds, we can expect a further tightening of the race. If this continues through the summer, it appears Erie County will once again be a battleground county.”