Hurst hockey alums face off when NYPD vs. FDNY at Madison Square Garden 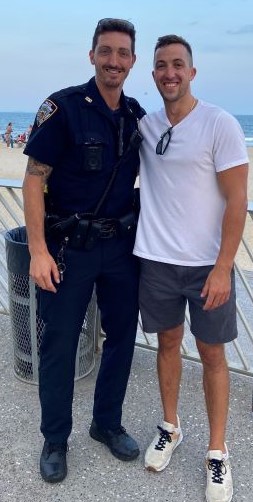 Two former Mercyhurst Men’s Hockey players will meet on opposite sides of the ice when FDNY Hockey and NYPD Hockey host a special "Hockey Heroes" matchup honoring the 20th anniversary of 9/11 at Madison Square Garden on Thursday, Sept. 9. A sell-out crowd is anticipated and, for the first time, ESPN2 will air the contest live at 8 p.m. ET.

“I cannot wait to watch Dan and Matt play tomorrow night live on ESPN2 in front of a packed Madison Square Garden,” Gotkin said. “Both of them represent all that’s good about people as they lay it on the line every single day to help and protect others. This unbelievable event for such a worthwhile cause is a stark reminder of the tragedy of September 11th and we must never forget.”

The commemorative game will extend the 47-year rivalry between the FDNY and NYPD. The FDNY currently leads the all-time series with 25 wins to the NYPD's 18 to go along with two draws (the game was not held in 2020 due to the COVID-19 pandemic).

The amateur hockey game, which is comprised of firefighters, police officers, and their respective members, has proven to be quite a draw selling out Madison Square Garden four times, including the 2002 event which was the first after the 9/11 attacks.

Prior to the puck drop, both teams will commemorate the 20th anniversary of 9/11. In a special ceremony, the teams will honor those lost in the attacks and all the members who have since died from 9/11 related illnesses. Additionally, firefighters and police officers lost in the line of duty over the course of the past two years will be remembered.