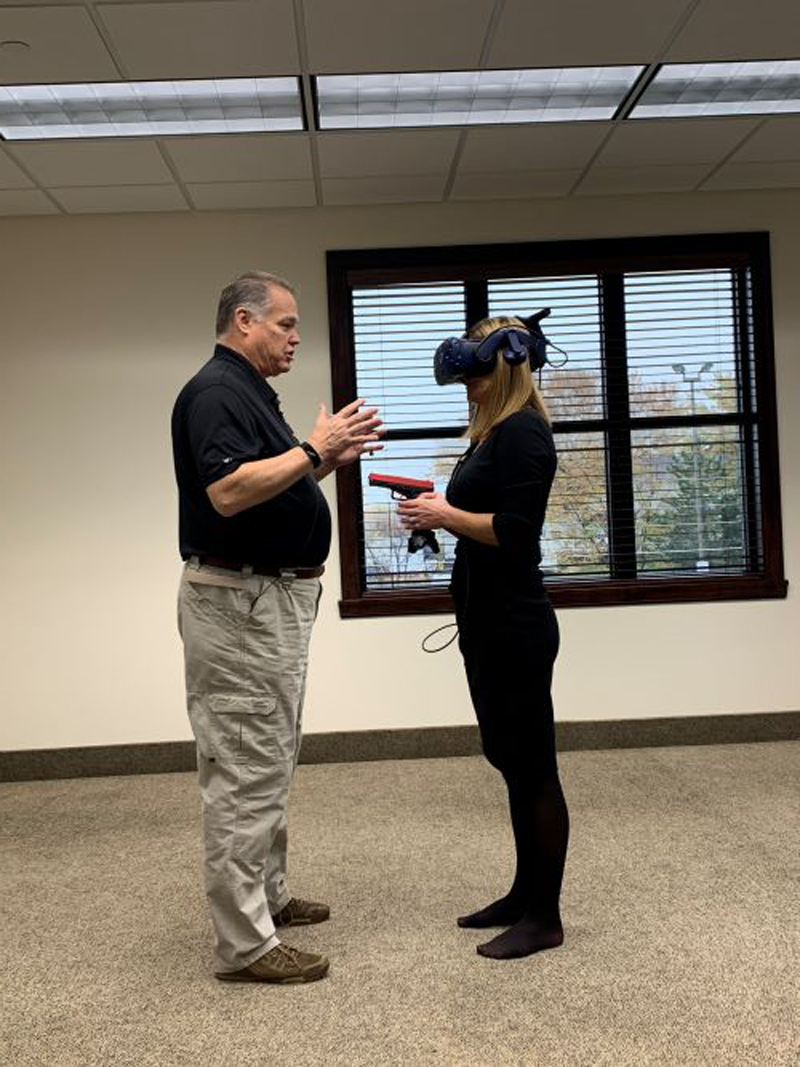 A back alley, a living room, a school yard, a car stop … the work space for police knows no bounds, and it’s impossible to replicate in a typical classroom or gun range.

“The great thing about this new technology is that it brings you closer to a real-life experience than anything I’ve ever seen before,” said Bill Hale, academy director and a former Millcreek Township police officer. “It’s so immersive; you feel you are there.”

Police officers encounter stressful situations daily, and the scenarios often call for immediate decisions. With the progression of simulation-based learning to interactive training that provides realistic experiences, trainees can practice appropriate responses, including how to de-escalate dangerous situations.

Hale said he intends to make the new technology available to local law enforcement and possibly to social service and mental health agencies that could benefit from de-escalation training. Already, officials of the Millcreek Township Police Department have taken a look at it, as has Mandy Fauble, executive director of Safe Harbor Behavioral Health, and Erie Police Chief Dan Spizarny is slated to visit in the near future.

Meanwhile, Hale took Erie News Now reporter Emily Matson through the paces last month for a sweeps story she was doing on the VR machine, essentially a pair of goggles and some basic acoustics. In an empty room at the police academy’s North East offices, Matson made a quick assessment of her surroundings, planted herself in the middle of the room, and adjusted the VR apparatus on her head. Hale stood nearby. In the corner of the room, academy deputy director Ron Gluvna manned a computer station, controlling what scenarios Matson would experience.

To demonstrate the VR effect on the human body, Hale started with a scenario that compels you to walk a plank jutting from a building many stories above the ground. Matson’s fear was palpable as copious beads of sweat sprang from her palms. Despite knowing that she was standing on a carpeted floor in an empty room, repeatedly reinforced by Hale, she was reluctant to move. Eventually, she took that wabbly first step and walked the plank without incident.

Had she stumbled, Hale said, she would literally have experienced the sensation of falling through the air.

Next, Matson is given an imitation Glock pistol and conveyed to a cityscape, where her charge is to identify and shoot menacing perpetrators, all the while protecting innocent bystanders. “This isn’t target practice,” Hale reminded her, as she warily worked her way around the room, directing her aim, and shooting. “This is an exercise in decision-making.”

In another scenario, Matson is called upon to coax a young girl off a bridge, where she is cowering in contemplation of jumping. Gluvna controls the avatar, so the girl may respond cooperatively, or not, to Matson’s appeals.

Matson implores her to come down from the ledge, to talk, to let her help. Just when it seems the girl is about to comply, she stands abruptly and teeters precariously on the edge. So engrossed in the emotional scenario, Matson reaches out to grab her, only to chide herself later for being duped into reacting. However, Hale tells her that a week earlier, one of the academy’s cadets went so far as to charge into the wall in his own attempts to rescue the victim.

Meanwhile, he added that there is no doubt in his mind that the new VR technology will better prepare officers to respond effectively and professionally with the many scenarios they deal with each day as they work to protect their communities. Moving forward, he anticipates applying for grant funding that will enable the academy to customize scenarios, such as using taped footage from a local school, for instance, to more authentically train for a school shooting.