Fr. Boyle draws on experience working with gang members in talk at Mercyhurst 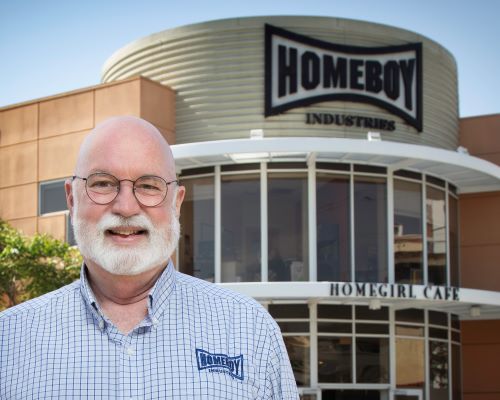 As the founder of Homeboy Industries in Los Angeles, the largest gang-intervention, rehabilitation and reentry program in the world, Father Gregory Boyle, SJ, will bring his message of courage and hope to Mercyhurst University on Thursday, Sept. 23.

Father Boyle will celebrate the university’s Mass of the Holy Spirit, which acknowledges the spiritual beginning of a new academic year, and later address “Be Fearless for Me: Courage and the Gospel of the Marginalized” at a free, public lecture at 7 p.m. in the newly renovated Mercyhurst Athletic Center.

A Jesuit priest, Father Boyle has received the California Peace Prize and been inducted into the California Hall of Fame for his pioneering work. In 2014, President Obama named Father Boyle a Champion of Change. He has also received the University of Notre Dame’s 2017 Laetare Medal, the oldest honor given to American Catholics. He is the author of the 2010 New York Times-bestseller Tattoos on the Heart: The Power of Boundless Compassion and Barking to the Choir: The Power of Radical Kinship. His third and latest book, The Whole Language: The Power of Extravagant Tenderness, will be out this fall.

Most recently, his organization received a $20 million donation from philanthropist MacKenzie Scott, former spouse of Jeff Bezos, and Dan Jewett.

Founded in 1988, Homeboy Industries draws nearly 9,000 people every year, all seeking a range of services, from anger management and job training to domestic violence support and legal assistance. The nonprofit also employs people in its own social enterprises, including a bakery, café, and diner, as well as a silkscreen and embroidery shop, farmers’ markets, and catering services, according to America – The Jesuit Review.

Father Boyle’s Mercyhurst message will focus on a theme espoused by Pope Francis: the credibility of the Church rests in the Gospel to the Marginalized, the invitation from Jesus to be courageous in living the gospel at the margins.

Drawing on 30 years of working with gang members, Father Boyle will center his talk on joy, hope, and the courage of tenderness. His Mercyhurst visit is sponsored by the William C. Sennett Institute for Mercy and Catholic Studies.

Homeboy Industries is the largest gang intervention, rehabilitation and re-entry program in the world. Annually, the $25 million nonprofit welcomes nearly 9,000 people through its doors who are seeking services and support. An additional 10,000 people come as visitors who experience the exquisite mutuality of the community. Formerly gang-involved and previously incarcerated adults and youth are part of the innovative model and therapeutic community of wraparound services and social enterprise businesses. In combination with workforce development and job training in the social enterprise businesses, Homeboy Industries provides healing and alternatives to gang life, while creating more inclusive, safer and healthier communities. Through the Global Homeboy Network, Homeboy Industries engages with hundreds of like-minded organizations around the world providing technical assistance and fostering a paradigm of social change rooted in radical kinship and a commitment to standing with those on the margins.