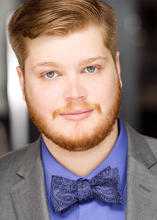 Royce Strider is best known throughout the U.S.A. as a versatile and charismatic singer and performer. Among many recent performances, Royce made his Mississippi debut with the Natchez Festival of Music​ as Carl-Magnus Malcolm (​A Little Night Music​) and the Valentin cover (​Faust​), as well as his Pittsburgh debut as part of the Ensemble for Disney’s ​The Little Mermaid​ with ​Pittsburgh Musical Theater​.

In the fall of 2017, Royce made his debut with ​Painted Sky Opera​, covering Sacristan (​Tosca)​ . For the summers of 2015, 16, and 17, he worked with the ​Ohio Light Opera​, performing an array of operetta and musical theater, including Oliver Hix (​The Music Man​), Prime Minister von Mark (​The Student Prince​), Prince Ulrich (​The Lady of the Slipper​), Second Gunman (​Kiss Me Kate)​, Detective Baker (Jerome Kern’s ​Have A Heart​), and covering Captain Corcoran (​H.M.S. Pinafore​) and Pish-Tush (​The Mikado)​.

His concert work includes Brahms's ​Requiem​ with St. John the Divine Episcopal Church and River Oaks Chamber Orchestra, and the Fauré ​Requiem​ with Saint Theresa Catholic Church, both in the Houston, TX area.

Royce earned his Master’s of Music at the University of Houston, where he was prominently featured with the ​Moores Opera Center​ as Capulet (​Roméo et Juliette​), the Mayor (John Musto’s ​The Inspector​), Reverend Hale (​The Crucible​), Prince Yashvin (David Carlson’s Anna Karenina​), Guglielmo (​Così fan tutte)​ , and Brétigny (​Manon​). He also sang Mozart’s Coronation Mass​ for the season finale concert with the ​Moores School of Music​ choir and orchestra.

With roots in Norman, OK, he completed his Bachelor of Music at the University of Missouri - Kansas City. Royce is currently based in the Pittsburgh area, and loves good food, good wine, and his not-so-good cats, Hamlet and Horatio.