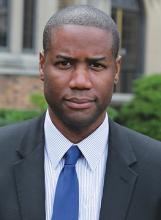 Dr. Orlandrew E. Danzell is an Associate Professor and Chair of the Department of Intelligence Studies. He was the 2015 Mercyhurst Research Fellow. Dr. Danzell regularly teaches courses in counterterrorism, intelligence theory and application, research methods, and US national security at the graduate and undergraduate levels. He received B.A. degrees in History and Political Science in 2003 from Cameron University (Summa Cum Laude), a M.A. in Political Science in 2007 and a Ph.D. in Security Studies in 2011, both from Kansas State University. Dr. Danzell main research fields are intelligence theory, military interventions, international/domestic terrorism, and other themes related to national security. He uses both quantitative and qualitative methods to develop and test new theoretical insights. His research has appeared in several highly regarded peer-reviewed academic journals such as Journal of Conflict Resolution, Terrorism and Political Violence, Defense and Security Analysis, and Behavioral Sciences of Terrorism and Political Aggression. Dr. Danzell is currently working on research examining the determinants of terrorism in sub-Saharan Africa, the evolution of ISIS, and espionage in the 21st century.

·       Danzell, Orlandrew E., and Stephen Zidek. 2014. "Does Counterterrorism Spending Reduce the Incidence and Lethality of Terrorism: A Quantitative Analysis of 34 Countries" in the The Test of Terrorism: Responding to Political Violence in the Twenty-First Century, edited by Alastair Finlan. London: Routledge.