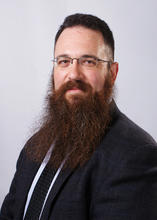 A versatile and adventurous performer, Jonathan R. Moser – conductor, violinist, violist, vocalist and teacher – regularly concertizes with chamber ensembles, as a recitalist, and with orchestras. He is Principal Second Violin with the Erie Philharmonic and this year will also be performing as soloist with the Erie Junior Philharmonic. Other upcoming performances include recitals at Mercyhurst University. In December 2016, Mr. Moser enjoyed the opportunity to participate in an expansive ten city orchestra tour of China and for two years he toured extensively with Sandip Burman – an internationally renowned tabla artist. Mr. Moser has served as concertmaster for Pittsburgh Opera Theater, Music on the Edge, the Erie Philharmonic, and Musica Nova, among others. He has served as Principal Second with the Bay-Atlantic Symphony and the Wheeling Symphony. Mr. Moser was winner of the Pittsburgh Concert Society Solo Competition, the Philadelphia College of Bible Solo Competition (2 years), the Northern Virginia Music Teachers Association Solo Competition, the Shenandoah University Concerto competition, and was a finalist in the National Symphony Orchestra’s Young Soloists Competition. Mr. Moser was a founding member of the Arizona State University’s Katherine K. Herberger Graduate String Quartet.

Mr. Moser has loved music ever since childhood when he would sit under the family piano listening to his parents and grandmother playing Beethoven, Chopin, and Rachmaninoff. His formal musical education began at five years old as a violin student, an education he pursued through a Bachelor of Music in Performance degree from Shenandoah University and a Master of Music in Performance degree from Arizona State University, with additional Doctoral studies in performance. Mr. Moser has enjoyed working with many outstanding teachers including Dara Morales, Katie McLin, James Stern, Sergiu Schwartz, Linda Cerone, and Ronda Cole, and he has performed in master classes with Jaime Laredo, Claude Frank, Sylvia Rosenberg, Shlomo Mintz, and Sergiu Luca.
During his education, Mr. Moser minored in voice and studied viola -- and discovered a passion for conducting. Now entering his third year as director of the Mercyhurst Civic Orchestra, he has lead the orchestra into greater and more challenging repertoire, and has expanded the performance schedule to include three full symphonic concerts and opera performances. Mr. Moser instituted an annual concerto competition, led the ensemble through the shift from a chamber group to a full symphony, and has expanded the membership.

This past fall, Mr. Moser began his first full year as Artistic Director of the Erie Junior Philharmonic, leading into a new era of expansion and musicianship, through innovative programming, accelerated outreach, and inspiring students to desire and achieve high standards. As a tireless advocate of youth education, Mr. Moser has brought the ensemble back to downtown Erie in the historic Strong Vincent Middle School. He has also led the redesign of the entire program starting with a renewed string camp in early August.

Summers, Mr. Moser can be found working as the Orchestra Program and Adjudication Director for the Philadelphia International Music Festival where he organizes and oversees up to ten orchestras reaching 400 - 500 students. Prior posts include Orchestra Director at Kutztown University and Music Director of the Wilmington Community Orchestra. Before moving to Philadelphia, he was the Director of Orchestras and Instructor of Music at Westminster College and served as Adjunct Faculty for Grove City College. He has also been the Director of Music at University Presbyterian Church, Providence Presbyterian Church, and Proclamation Presbyterian Church. Also a lifelong learner, this past summer Mr. Moser was honored to attend the Pierre Monteux School & Music Festival as a 2018 Bernard Osher Conducting Scholar.
Mr. Moser and his wife are blessed with three artistic children.