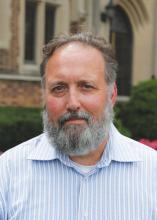 Christopher A. Corpora, Ph.D. is a Professor of Practice in Intelligence Studies at Mercyhurst University.  He is an intelligence and international security expert with over 25 years of experience in the field and over a decade of teaching – most recently as an Associate Professor at the National Intelligence University.  He served as a senior advisor and consultant with multiple U.S. government agencies and private companies, focused on countering transnational threats -- global illicit trafficking, transnational organized crime, corruption and violent extremism.  Previously, he served as the Team Lead/Chief of Party for support to the Syrian Opposition with the U.S. Department of State’s (DOS) Bureau for Conflict and Stabilization Operations (CSO).  Dr. Corpora also served as Team Lead/Chief of Party for CSO’s Maldives post-coup engagement, Senior Advisor for anti-corruption to ISAF and Deputy Director for Anti-Corruption at the U.S. Embassy in Kabul, Afghanistan.  Prior to joining CSO, he served as a Senior Advisor to the Federal Bureau of Investigations – helping redesign the Directorate of Intelligence and establish the FBI’s first, focused program to work with state and local law enforcement investigative fusion centers.  Dr. Corpora began his career as Counterintelligence (CI) Special Agent with the U.S. Department of Defense and worked in this role for nearly 15 years, culminating in an assignment with the Office of the Director of National Intelligence as its first Chief of CI Collection.  Throughout his career, he has worked with and supported multiple private and public sector efforts to address the myriad threats associated with illicit trade and transnational organized crime in at-risk regions and has deployed over 10 times to various conflict and post-conflict regions.

Dr. Corpora is a noted nontraditional security threats expert – ranging across the spectrum from counterterrorism through money laundering/threat finance to countering violent extremism – focusing on their effects in developing, conflict and post-conflict regions.  He is an accomplished, career national security professional with over 25 years of military, civilian government and private sector experience – including key positions with DIA, ODNI, FBI and U.S. Department of State.  He has published and presented dozens of scholarly essays, articles and book chapters and is an active senior fellow and scholar in several research and policy institutes, most notably the Terrorism, Transnational Crime and Corruption Center (TraCCC) and an alumni of the Woodrow Wilson Center’s Junior Scholars Training Seminar.  His most recent publication is “The tangled relationship between organized crime, terrorism and proliferation,” in Michael Tanji’s 2009 edited volume Threats in the Age of Obama. He received his Ph.D. from American University’s School of International Service in 2005.  He is the proud father of three wonderfully talented daughters.