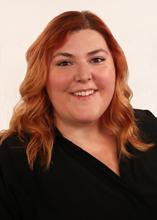 Amanda Boots is the Program Director for the Carpe Diem Academy. Ms. Boots began her Mercyhurst journey in 2011 where she moved to Erie from Pittsburgh. During her academic career at Mercyhurst, she received a Bachelor of Arts degree in Early Childhood & Special Education and a Master of Science degree in Special Education. In 2015, Ms. Boots joined the Carpe Diem Academy as a graduate assistant and lead teacher. She then advanced to Assistant Director in 2017 and Program Director in 2019.

Established in 2012 and funded by 21st Century Community Learning Centers, the Carpe Diem Academy provides more than 250 Erie Public School students ranging from kindergarten to second grade with the opportunity to attend an after-school program during the school year. The program employs Mercyhurst education majors to encourage creativity and help students in all academic areas.