MIAC Live: The Ten Tenors: Love Is in The Air 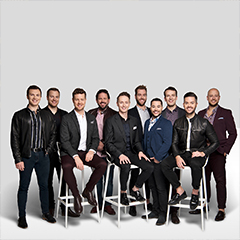 When
Wednesday, March 30, 2022 - 7:30 pm
Where
Mary D’Angelo Performing Arts Center
The Ten Tenors are an Australian music ensemble that has toured extensively nationally and internationally. Since being founded in 1995, the group has headlined more than 2,000 concerts around the world, sold more than 3.5 million concert tickets, and become renowned for their dynamic, choreographed performances and skillful ability to seamlessly transition from operatic arias to soulful ballads through to chart-topping pop and rock songs. They have shared the stage with artists such as Lionel Richie, Rod Stewart, Andrea Boccelli, Willie Nelson, Alanis Morissette, and Christina Aguilera. They have released more than 20 albums, most of which have achieved platinum and gold status, including the recent chart-topper, Love is in the Air. They will perform at the Mary D’Angelo Performing Arts Center on Wednesday, Marcy 30, at 7:30 p.m. Tickets are available at the MIAC box office website.
sfy39587stp16