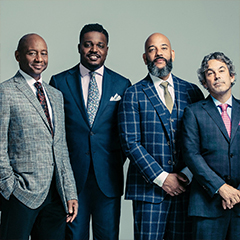 When
Tuesday, February 01, 2022 - 7:30 pm
Where
Mary D’Angelo Performing Arts Center
From his early acclaim as a saxophonist bringing new energy and new audiences to jazz, Branford Marsalis has refined and expanded his talents and his horizons as a musician, composer, bandleader, and educator – a 21st century mainstay of artistic excellence. He formed his own quartet in 1986 and, with a few minor interruptions in the early years, has sustained the unit as his primary means of expression. Known for the telepathic communication among its uncommonly consistent personnel, its deep book of original music replete with expressive melodies and provocative forms, and an unrivaled spirit in both live and recorded performances, the Branford Marsalis Quartet has long been recognized as the standard to which other ensembles of its kind must be measured. He will perform at the Mary D’Angelo Performing Arts Center on Tuesday, February 1, at 7:30 p.m. Tickets are available at the MIAC box office website.
sfy39587stp16